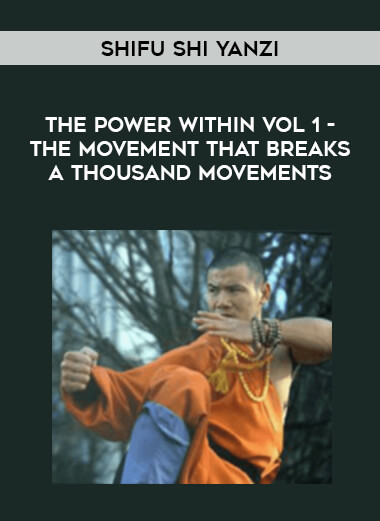 Salepage : Shifu Shi Yanzi -The Power Within Vol 1-The Movement that Breaks a Thousand Movements

Archive : Shifu Shi Yanzi -The Power Within Vol 1-The Movement that Breaks a Thousand Movements

The Power Within Vol.1 DVDrip The Movement that Breaks a Thousand Movements Shaolin Sanshou techniques are among the best in the world.
These traditional techniques teach both physical and mental skill in the art of war and the calm focus brought about by Zen Philosophy.
They can teach you how to use your mind and heart to control yourself and your opponent in any situation.
Perseverance and hard training from the Sanshou Techniques DVD will increase your fight skill to the highest level and enable you to become the best fighter in the world.
About the Shifu: Shifu Shi Yanzi One of the 34th generation of fighting monks to come from Shaolin Temple based in Songshan, China.
At the age of 16 he joined the Shaolin Temple, where he spent 15 years studying and training to become a monk under his master, the current abbot of Shaolin Temple, Shi Yong Xin.
Whilst at Shaolin Temple, Shifu Shi Yanzi studied and excelled in the three areas if Ch’an Buddhism and philosophy, which are essential elements of Shaolin culture, Qi gong and Gong fu.
Shifu Shi Yanzi reached a high standard in Qi gong in particular the Qi gong forms of Shaolin Yi Jin Jing and Xi Sui Jing Qi Gong are considered ‘treasures’ with many benefits such as muscle-tendon building, purifying the bonemarrow, increasing energy levels, slowing the ageing process and helping to strengthen the immune system.
In Gong fu, Shifu Shi Yanzi, studied many traditional Shaolin forms during his time at the temple, among them were; 72 styles in which he became a master at the iron jacket and iron leg; sanshou a form of free fighting that involves punching, kicking and throwing amongst its range of techniques and which he was eight-time national champion of China and world champion twice; and hand and weapon forms, notably Xiao Hong Quan, Da Hong Quan, Lohan Quan and Xingyi Ba.
The Abbott of Shaolin Temple, China sent Shifu Shi Yanzi to the UK, over a decade ago to promote Shaolin culture and Shaolin Temple UK (STUK) to become the official UK branch of Shaolin Temple.

Readmore about: Shifu Shi Yanzi - The Power Within Vol 1-The Movement that Breaks a Thousand Movements
Shipping & Delivery $29.00
Add to wishlist
Start typing to see products you are looking for.